I suppose my political leanings might be described as liberal or "left of centre" and lead to a natural scepticism about CCTV surveillance. However, a recent experience has made me less sure.

I went to a dance in London the weekend before last and planned to get home via a National Express coach from Victoria. They messed up and stranded me overnight. After I finally got home and caught up on some sleep, I emailed a detailed complaint to their MD who despatch his Head of Coach Stations to Victoria where she grabbed the CCTV recordings. This not only allowed her to verify my account, she identified more shortcomings. The upshot was that they have suspended some staff pending disciplinary action and are sending me a compensation cheque - enough to have covered a night in a decent London hotel.

It's also pleasing to see a business in transition: The poor performance of the staff at Victoria was not a complete surprise to this occasional bus user but the superb complaint handling makes me think the industry might be getting its act together at last.

Dancing, Spinning and getting Dizzy

Before I got into dancing I got dizzy very easily and had nasty experiences on some fairground rides. As I did more dancing, my tolerance for rotation increased greatly and nowadays I can do very long swings, spinny French waltzes, etc. without any trouble. Of course, I sometimes find myself partnered with someone who gets dizzy and have to look out for that.


Novices who get dizzy often get advised to do "spotting" or to focus on some convenient part of their partner's body. I've always suspected that this is rubbish advice because:
So I was interested in some recent research that suggests that dancer's brains adapt over time to suppress input from their vestibular systems, I thought about this again at a recent ceilidh where I danced with a very old friend who I hadn't seen for about a year. She got very dizzy in swings and it never used to be a problem.

I was concerned because I've known dizziness like this to accompany a diagnosis of ME. However, she told me that she had done no dancing for many months. Perhaps the brain adaptation had reversed. Hope so!
Posted by Steve at 12:55 0 comments

Getting stranded in London: A sort of guide


Due to a cockup by National Express (that they've already described as “appalling”) I found myself at Victoria Coach Station at midnight last Saturday with the next coach at 0730.

I thought I'd try and have an adventure or at the very least survive 7 degrees C and occasional rain. After speaking to cluster of 9 hotels I asked a policeman for advice about safe places to sleep. He pointed out that “This is Victoria!” before directing me to a shopping arcade up the road. I got asked for change three times on the way and I found it was quite a haunt of mainly young people with wheeled suitcases and i-phones waiting for coaches to various airports.
After sitting on a step for about 2 hours, I was shivering so much I probably fooled a few local seismographs into reporting an earthquake. So I went for a walk and was bored enough to read a sign at a bus stop that said “Night Buses”. Aha! A night bus, I reasoned would take ages to get anywhere which is usually what's wrong with buses but tonight, a long trip on a warm bus seemed an attractive bargain at a flat fare of only £1.40, Joy! In 3 minutes, a heated conveyance would take me to the delights of Sutton in Surrey!

Sure enough, it came along but as it was already packed, it sailed straight by. The next offering was Ealing Broadway in 15 minutes. Now, I liked this idea because I'd heard of the place before and remembered it had a station so if I ran out of buses I could still get back to Victoria. The N11 was full too – people standing all the way up the stairwell but the driver was attracted to the challenge of getting even more people on. No one spoke English; it was mainly Germans which didn't seem right for Ealing Broadway somehow. I reckon the journey took well over a warm hour and took in the Worlds End Health Centre which sounds like something from Douglas Adams. He'd also have liked the announcement lady on the bus “N11 (smile in voice) to (tiny pause) Ealing Broadway!”. You just wanted her to change to Samarkand or somewhere more exotic but no.

I found an amazing bagel shop still open in Ealing Broadway around 4am that sold me a hot cheese bagel for £1.50 and you could sit in and eat it. I considered the cup of tea upgrade for 50p but what goes in must come out and this city of bright lights and CCTV probably had a "failing to be convenient" law. 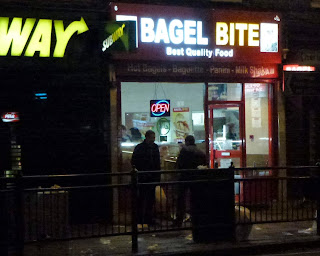 Anyway, when I came out, I discovered that the last N11 back to Victoria had gone and the first tube wasn't until after 6. But wait, I could just catch the last N7 and get off at Oxford Circus. Perhaps it would be interesting at silly O'clock? The driver of the N7 reckoned that since he only had 3 passengers, he could get up a bit of speed and regarded traffic calming as challenges to be swerved around or crashed over. I remember reading once that you can tip a double decker bus 30 degrees from the vertical before it falls over but I think this guy was trying for the record. Terrific banging and rattling from the chassis! If anyone had been using an iPod it would have upset them.

Oxford Circus around 5.30 and Macdonald's is open and doing a brisk trade. I haven't visited one of their "restaurants" for about 20 years but when the rain is coming on again, your perspective changes. I order a bacon and egg wrap and actually the egg part wasn't too bad.

I wandered back up to Oxford Circus again and see a small crowd gathered around the entrance to the tube. Then a tannoy starts up saying that the station didn't open until 7am. Perhaps it was a recording set off by a movement sensor? George Orwell may have been imaginative but he had his limits.

So I walked  generally downhill as I knew that if I reached the Thames and then turned right, I'd get close to Victoria. Pall Mall was a name I remembered from "Monopoly" so I followed it until a sign for St James Park caught my eye. It was really quiet and dark with no one about except some ducks and a possibly royal cat. Along Birdcage Walk (who makes up these names?) past a few royal bits and back to Victoria where the Nero is open in the rail station and sells me a decent coffee.

I didn't get to bed until noon. Quite pleased to have pulled a 26 hour all-nighter. I'd also got just a whiff of what the real homeless go through.

Oh, and the dance beforehand was pretty good :-)