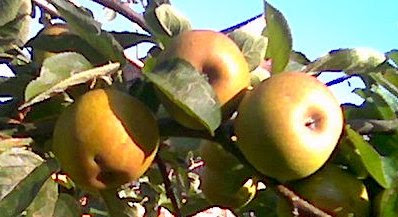 I've grown this splendid apple for around 11 years and I'm starting to get the hang of it. The original tree was found in Gloucester, UK about 300 years ago. It's often pretty dull in appearance and a difficult beast but it has a superb flavour which can resemble a fine pear! That's why it's still grown and has even spread to the USA.

I'm assuming that you know how to grow apples or have/will read up on it. What's here is information specific to this particular variety. Even more narrowly, I mainly stick to information that other web sites don't mention.
Link to Wikipedia entry with more general information and history

You might think that harvesting your own apples was a simple matter. Spot a glorious perfumed fruit, lift it off the tree and bite? Some types might be that easy - particularly the "earlies" but Ashmead's Kernel is a "late" and has very little smell. You're supposed to pick them mid-October but in my experience in Gloucestershire, that can be too late. Sure, by that time, some of the fruit you leave on the tree may be a lovely bright red there will also be black and brown spot/rot damage.

Another complication - but a good one - is that it can be like having two varieties of apple on one tree:


Both sorts of fruit are well worth eating. Some never get any red skin no matter how long you leave them on the tree while others colour up quite early. There may be some correlation between red skin and sun exposure but I'm not sure.


As an experiment, I put zip-lock bags on a few fruits on the tree and left them for another 6 weeks. This enabled them to grow larger and colour up with less damage. This gave me a fruit tasting like a sweet Cox. I stored two others but they didn't keep
Ashmead's Kernel are "keepers". It's not just that you can keep them, you must if you want to enjoy their magical "pear drop" flavour. However, those with a bit of red in the skin come off the tree with a strong sweet/sour flavour that you may enjoy.

Start paying attention to the tree in mid-late August. In a year like 2011, some of the fruit will come away from the tree very easily but late September is more usual. Sample a few of the fruit - if it's a bit tasteless and maybe sharp, you're too early. In the next stage, the fruit becomes sweet and possibly too sharp for many palates.

Now you should watch the crop several times a week because it's very nearly ready to pick. The right stage looks like this:
Any imperfect fruit should be eaten although but they may not be very good. Russetting isn't a problem. Store the rest. Like fine wine, they will improve with time.

The usual advice about apples is to store them somewhere cool and not too dry. This is supposed to maximise their life. However, what most people want is a steady supply of perfect fruit. Here's my system:

As the fruit ages, the russetting may increase. For "pear drop" flavour, the "look" you want is rather tired and dull. Hard like a cricket ball may well be OK but best of all is a slight softness like a rubber ball.

It's a good idea to prevent apples in store touching each other. Traditional techniques are wrapping individually in newspaper or the use of special trays like in a greengrocers. I didn't bother and lost a lot of one batch to rot.


Ashmead's Kernel is prone to this disorder - small brown "dead" areas in the flesh but barely visible from outside. Scientists don't fully understand it but it seems to be down to lack of calcium, excess magnesium or nitrogen and poor/irregular irrigation. After some bad seasons, I instituted the following regime and it seems to be working well:

Another problem that's common with Ashmead's Kernel. The tree is groaning with fruit one year and there's hardly any the next. You could ignore this quirk but you may find the larger crop suffers from Bitter Pit and doesn't keep.

How to thin out

The usual advice is to remove all fruit that's within 10cm of another one. That may be a lot of fruit - several hundred perhaps. You will worry that you're overdoing it but you're not. Since it's a lot of work, here's a cheat:

This technique gets rid of fruit that would have fallen off anyway in the next week or two. There's no point you culling them by hand.

We planted this tree some years ago and it did not produce at all for 4 or 5 year, last year we though it had come right but all the set fruit blew off. This year it has done brilliantly and we have over 140 lbs of these gorgeous apples. They make lovely juice and your keeping tips will be helpful. Nice post Thanks

What part of the country?

I said "in my experience in Gloucestershire" but perhaps your question was to no2hs2? :-)

I live in Cumbria and I have a large 20 years old Ashmeads tree. I can't reach the top branches - my fault for not keeping the pruning under control. It has many hundreds of apples so I take off what I can reach in October. These - in a bad summer like 2015 - are small. The couple of hundred remaining then grow in size (but still smaller than if grown in the south) and the top ones go red. I pick them on December 1st, or end of November if gales are imminent. Seriously - it's not supposed to grow this far north but it does and is so delicious, so who cares what you are supposed to do. Waxwings as well as blackbirds love them so I'm happy to leave a few at the top unpicked.

I just planted four of these in the West Kootenay region of British Columbia. Keep your fingers crossed! We get hot summers (30+ degrees Celsius) and a few weeks of our winters usually go down to -20.
As an English tree, that might be too extreme, lol! But I hope not, this is the best apple I've ever eaten!

I planted 6 of these trees about 12 years ago in Western NY USA our winter's have been mild but many have had cold below zero for several weeks it a time,this is an awesome fruit and it also bears our last name and makes it even more special

I planted 20 five years ago. Two have been lost. One just withered this year. The same thing happened to another a few years ago. What causes that? A blight? The trees were on M26 and are tip bearers. All are supported now. Really, because of tip bearing, the whole tree should be trellised at least until the tree grows stout.