In 2019 and for over 30 years before, similar dances have been offered once a month on a Saturday night during except during summer. This was the second scheduled event this winter although the first in January was cancelled.

In years gone by, entry was usually by cash on the door and numbers could go over 100 although occasionally they were much lower. This event was limited to 80  tickets bought online in advance. All 80 tickets were sold and I know at least two people who missed out.

Quite a few of the dancers were people who would have been there in 2019 but there were a lot of first timers - and that wouldn't have been so unusual prior to the pandemic.

The organisers were keen to be "Covid-safe",  all stewards were masked-up and there was guidance on the website:

We know that we need to keep everyone who wants to come to our dances as safe as possible. Our safety guidance for everyone attending is this:

I saw one dancer (who looked to be early teenage) masked up. Instead of draft beer at the bar, it was offered in bottles. There were a few old signs urging 2m social distance.

Overall, it was almost completely back to 2019-style.

In 2019 and for several decades before, similar dances have been offered once a month on a Friday night during except during summer. This was the second scheduled event this winter although the first in December was cancelled.

We certainly had 16 people on the floor quite often and it might have occasionally got up to 20.  In normal times, numbers could go over 100 although occasionally it's much less.  Most of the dancers were people who would have been there in 2019 although I did spot at least one completely novice couple.

The organisers were keen to be "Covid-safe" and advertised

These were enforced with the possible exception of the LTF (If the NHS checker App was set to only show "pass" if the vaccination and test were both in order, then it was enforced)
Nearly everyone chose a green ribbon. I've noticed before that after the summer, most people seem to either go dancing like it's 2019, stay away and just a very small minority actually go dancing but want restrictions.

English Ceilidh is fairly athletic and although  dancers tried hard, they were perhaps not as fit as they would have been in 2019 so there were quite a few rest breaks and the dance finished a little early.

Chippenham Folk Festival is normally in late-May but this year they put on slightly over a day of events 22-23 October. No campsite was offered and most of the larger venues were not used. Tickets for events were initially only available online although at the last minute, they were made available from the box office.

This attracted about 30 people although I was told that 60 tickets were available. It was held on the Saturday afternoon in Chippenham Town Hall, a superb upstairs room with an excellent floor. A handful of dancers arrived wearing masks and one kept hers on when dancing. Otherwise, it was very much as "normal".

It's difficult to comment on numbers because a directly comparable event didn't happen in pre-pandemic times. My feeling is that in normal times, selling all 60 tickets would have been hard - although had there, by chance, been a lack of recent similar events.it could well have happened.

This got up to about 25 people on the floor at any one time although I was told that 50 tickets were available.There were maybe a dozen people sitting out. It was held on the Saturday evening in Chippenham's Constitutional Club, an OK room with a reasonable floor. I don't think I saw any masks.. Otherwise, it was very much as "normal" except there was plenty of space

It's perhaps easier to comment on numbers because fairly comparable events happened in pre-pandemic times most Saturday evenings in Autumn/Winter in England. My feeling is that in normal times, selling all 60 tickets could have been easy although permitting "turn up and pay on the door" would have made it more certain. Given the recent lack of similar events, one might have expected high demand for this event but it really wasn't there.

As reported in previous articles in this series, a lot of people who "ought" to have been there were not. There were quite a few younger people who I don't recall seeing before.
Posted by Steve at 19:50 0 comments

In normal years,  this festival offers 3-4 ceilidhs on the greenfield site as well as a "Day of Dance" featuring Contra, etc. at a venue in the town. This year, the "Day of Dance" was cancelled and there were just two ceilidhs.

The organisers were a little coy about exactly what was on offer saying, "Not comfortable dancing in a crowd? Don’t worry! The evenings will start out as an upbeat standing concert and with callers on hand" and the programme billed the ceilidhs as  "An evening with" followed by the name of the band. The Friday event did start with an hour of concert but the Saturday was a dance from the start.

So did people turn up and dance? Yes, they did
I counted 5 sets of 8 couples = 80 people on the floor for one dance and roughly counted 88 for another. I doubt it numbers reached 100 and there can't have been many dances with less than 60. I saw one person wearing a mask on the dancefloor for just the first hour or so of the first dance.
It's difficult to say what "normal" numbers would be because over the years, it's varied a lot. Certainly, the numbers above are near the upper end of normal. A few notes on who the dancers were or were not:

In normal times, this is a series of monthly events attracting over 100 dancers. This was a "restart" event and the intention is that there will be another dance in October and presumably monthly thereafter. Differences from normal included: 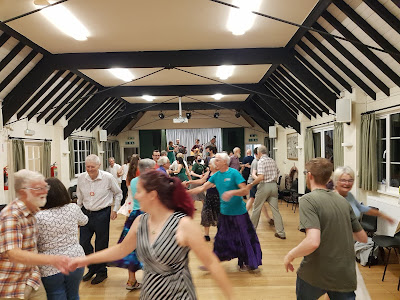 Moira Furnace Folk Festival is a small event usually held in late-August in the North West Leicestershire village of Moira which advertised a ceilidh: 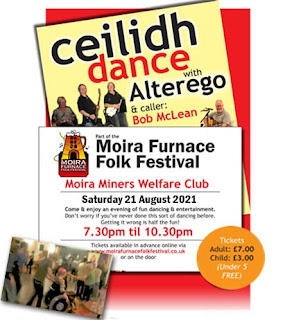 For comparison here's video of the 2019 event which shows the same band, venue and number of dancers as at the 2021 event.  It's typical of many smaller festivals in that the ceilidh is a small event with a local band and attracts a crowd of  30-40 people.

So, does this imply that Covid-19 has ceased to impact public dance events? Almost!

Taken with the experience at Sidmouth, it seems reasonable to assert that the public will show up and participate in dances much as in 2019.
Posted by Steve at 15:46 0 comments

This post is written to document what is and is not happening as of early August 2021 at a festival that usually sees lots of dancing. It's hoped that the observations will help dancers, organisers and others to plan for the future.

In normal years, this festival has a lot of social dancing in the form of ceilidhs, contras, American squares and the odd Bal or two. Typically, theses events are in marquees or local community halls. The number of  different people dancing over the course of the week probably approaches 1000.

By the time the festival started in 2021, "dancing like it was 2019" had been legal for several weeks  but due to the long lead times for booking infrastructure, etc. the cut-down festival planned no indoor events and no dancing.

One of the pubs, The Anchor Inn put on their lunchtime ceilidh series. Differences from 2019 included:

The density of dancers on the floor was probably a little lower than normal. Some, including some under-18s  wore masks but this declined during the week. A small minority danced as fixed couples so they didn't touch anyone outside their household.

I organised this. Essentially this was a daily offering of a Ceilidh/Bal at 8pm with a scratch band and callers. The main location was on the sea front outside the Bedford Hotel and typically attracted 20-30 dancers and up to 8 musicians. Each morning, the weather from the Met Office was checked and if the probability of rain from 2000-2200 was low, the event was posted to Facebook and announced at the Anchor lunchtime ceilidh. 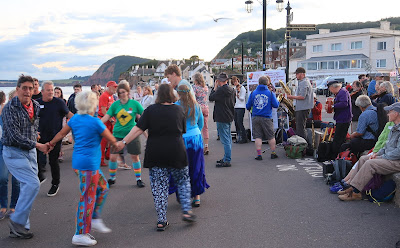 I came across a couple of instances of people dancing Irish Set in the afternoon although I was told it was a modified form designed to reduce contact between people not of the same household. One session was on the lawn of the The Triangle 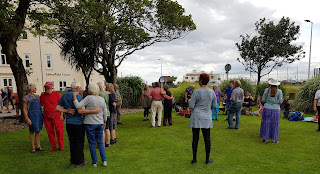 There was also a small gathering on the sea front.

Fine musicians are always attracted to Sidmouth for the Festival and when they gather for sessions, people often dance. (This is the essence of Bal Miniscule) - 2021 was no exception

We have demonstrated that there is at least some demand for dancing "like it's 2019" as the Covid pandemic wanes in the UK. The number of people at the Festival was only a fraction of the normal numbers. This was partly due to people fearing the virus but also because the Festival was much smaller and possibly because the "official" campsite had much less capacity than usual - and as this was sold out, it may explain why some younger dancers were absent. I met some people who usually dance but made the decision not to dance this year.
It's difficult to draw many conclusions about whether people will want to dance indoors during the coming Autumn as they might have done during 2019. Informal conversations with a number of festival-goers indicated that some were eschewing indoor life as much as possible. Some of the musician's sessions that would normally have been indoors were in outside spaces. One explained to me that she  expected to catch Covid at some point and would rather it was as a low dose rather than the large dose that could be available in a crowded pub.
It could be that if the pandemic continues to decline in the UK, people who were happy to dance outdoors during August will be happy to dance indoors a few months down the line.
It was odd that some people danced in the open air wearing masks when this is contrary to the WHO guidelines for exercise.
There were no "vaccine passports" or any testing regimes but there was this interesting approach to getting partners
Posted by Steve at 10:57 4 comments